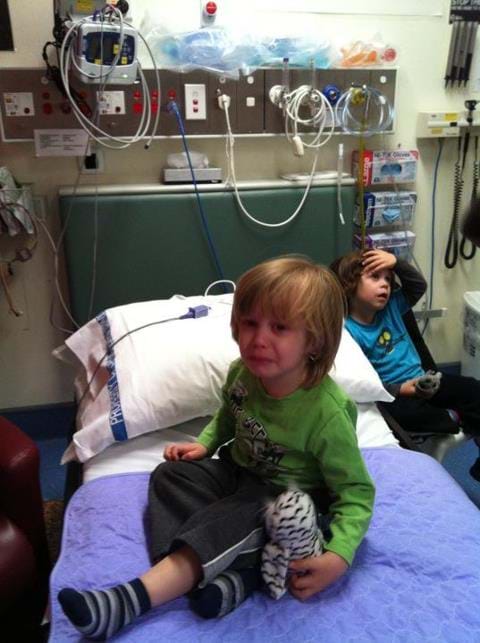 Most people think arthritis is an older person’s disease, but kids get it too.

Our son Ronan was just two years old when he was diagnosed with polyarticular juvenile arthritis, a form of juvenile rheumatoid arthritis that affects five or more joints. It’s an autoimmune disease, with no known cause or cure.

We knew something was wrong with Ronan when he was a baby. He is the youngest of five children, and would wake up screaming several times each night. It wasn’t a normal baby cry, and the only way to settle him was to rock him back to sleep.

We saw several GPs and paediatricians before finally getting an accurate diagnosis, and it’s been a nightmare of a journey since then.

Polyarticular juvenile arthritis can affect every joint of the body, and in Ronan’s case his eyes as well, if he develops uveitis (swelling of the middle layer of the eye).

It’s one of the worst kinds of arthritis.

Ronan takes non-steroidal anti-inflammatory medication (Naprosyn) morning and night, which is necessary but can have terrible side-effects. One day he had a nappy full of blood.

He now takes other medications, Zoton, to reduce the effect of the Naprosyn on his system. He also takes Panadol breakthrough, which he calls his jelly medicine, we inject a biologic every four days, and he has chemotherapy once a week, as well as folate every day.

Some days Ronan is like any other four-year-old. Other days he gets incredibly tired, or aggressive. We don’t know if it’s because of the medication, or because of the pain.

Ronan’s five-year-old brother wishes he could do magic to make Ronan better. And so do we.